The Agony and the Ecstasy 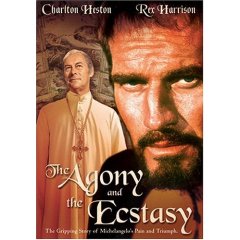 Just wanted to mention something that is actually rather old news, though I just found out about it. One of my favourite movies was finally released on DVD earlier this year. The Agony and the Ecstasy, starring Charlton Heston as Michaelangelo and Rex Harrison as Pope Julius II, tells the story of the painting of the Sistine chapel. I hope to write a review later for the Logres Hall Classic Reviews page, but for now just wanted to mention it here. My previous copy was a cheap pan and scan ('This movie has been formatted to fit your screen'; it's not widescreen, in other words) VHS with terrible audio and picture quality. The DVD is a restored version of the film and it is truly glorious. There is so much I had really never seen before. A great film about issues of art, life, and faith, and some of the best acting you are likely to see anytime soon. Superb script, too. Highly recommended.
Written by William Chad Newsom at 2:55 AM

If anyone is interested in some behind the scenes stuff on The Chronicles of Narnia, check out http://www.narniaresources.com