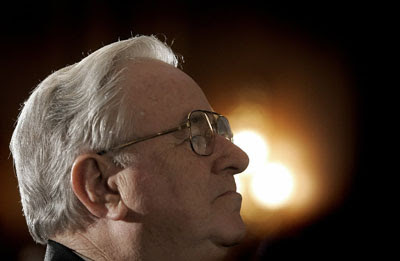 Christian minister and political heaven-raiser Jerry Falwell died last week at the age of 73, as everyone has heard by now. It is an understatement to say that he was a controversial figure, as even a cursory perusal of the comments after his death will reveal. Some are actually rejoicing at his passing. Many, many, are mourning. Others, while disagreeing with him, recognise the fact that he made an enormous impact on the worlds of American politics and religion. But he made enemies both without and within the Church. Sometimes this is a good thing. I can understand well why the cultural enemies of the church hated him: he stood against their worldviews (without, I believe, ever hating them as people) and would not compromise. He was not afraid to draw heat and fire for speaking what he believed to be the truth. But I find the hatred, or even the cool arrogance of some Christians difficult to understand. Granted, even those who might describe themselves as somewhat conservative, found themselves at odds with Falwell's words, which, as he himself admitted, were ocassionally intemperate. But what I really don't get is their opposition to him on the grounds that he was politically involved. That had to be the best thing he ever did for the conservative wing of the church. Fundamentalism is, in its history and essense, a retreatist theology that is content to let the world burn, so long as souls don't. Then Jerry Falwell comes along and talks as if, I don't know, Christians have a duty to labour for the good of the world, or something. Whatever you think of his theology (I would agree with him on the basics while disagreeing on many secondary articles), or his politics (ibid), he certainly challenged, successfully, millions of Christians to get involved in one side of the fight that they had been neglecting for too long. No, as many will be quick to point out, God is not a Republican. The Republican Party, for what it's worth, is a bloody mess, right now. So, maybe you won't like Falwell's party affiliation. But how many Christians (I mean the kind that actually believe the Bible to be a little more binding than, say, the Pirate's Code) can disagree with the things Falwell fought for? Anyone want to argue for the expansion of abortion on demand? Any anti-family conservatives out there? Then what's the big problem with Christians trying to fight for such things? Maybe it's a question or tone, or method, I don't know. But when the Church leaves a culture to rot, it will certainly do so. Q.E.D.

'My own sense, having spent a lot of time in the States over the years, is that he was a classic of his type and with a lot more integrity than some of the shady characters in the religious penumbra.' (N.T. Wright, Bishop of Durham)

'No man in the last century better illustrated Jesus' warning that "All men will hate you because of me" than the Rev. Jerry Falwell, who left this world on Tuesday. Separately, no man better illustrates my warning that it doesn't pay to be nice to liberals...From the news coverage of Falwell's death, I began to suspect his first name was "Whether You Agree With Him or Not." Even Falwell's fans, such as evangelist Billy Graham and former President Bush, kept throwing in the We didn't always agree" disclaimer. Did Betty Friedan or Molly Ivins get this many "I didn't always agree with" qualifiers on their deaths? And when I die, if you didn't always agree with me, would you mind keeping it to yourself? Let me be the first to say: I ALWAYS agreed with the Rev. Falwell...Despite venomous attacks and overwhelming pressure to adopt the fashionable beliefs of cafe society, Falwell never wavered an inch in acknowledging Jesus before men. Luckily, Jesus' full sentence, quoted at the beginning of this column is: "All men will hate you because of me, but he who stands firm to the end will be saved."' (Ann Coulter, Conservative Author and Speaker)

He held God’s promises close to his heart throughout his 55 years as a Christian and more than 50 years as a pastor, never losing sight of the unique vision God had planted in his heart.
I saw through the years that my dad always sought God’s direction and then boldly, even audaciously, went to work to carry out what God placed in his heart...I never once saw my father stray from God’s direction. I never doubted dad’s walk with God because I witnessed his unswerving commitment to follow God’s principles every step of the way...As I think back on my dad’s nearly 51 years of ministry, I can only attribute its great success to God and a man who understood vision. I hope that I, too, will be able to effectively teach these principles to my children in the years to come. And, I hope that as I continue teaching these principles — to the church and to my own family — that it will be far more than just words. I am praying that God will allow me to embody the dedication to the Gospel in my life that I saw in my father’s life.
May people see these principles lived out every day in my life, just as I had the great privilege of witnessing this in my dad’s life. (Jonathan Falwell, son of Jerry Falwell)

('The souls of the righteous are in the hand of God, and the torment of death will not touch them. In the sight of the unwise they seemed to die, and their departure is taken for misery - but they are at peace.')
Written by William Chad Newsom at 5:56 PM

Hi i just surfed in searching for interesting facts on Essenes in the blogs.
you have a cool blog. Do keep up the good work. I'll be back for more. i live
far from where you live. its nice to be able to see what people from across
the world thinks.

On a related note perhaps you might find the following article interesting.
we are currently doing a series of posts on essenes and their culture and i'll
like to hear your take on the subject via comments. See ya there....

Warm Regards from the Other Side of the Moon.
Bijoy Cletus - Kerala, India