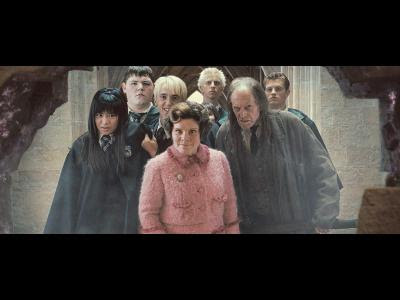 A thought on Harry Potter: watching the just-released film version of Harry Potter and the Order of the Phoenix, I was reminded of some thoughts I had when reading that book a couple of years ago. Does anyone else notice that, with the intrusion of the Ministry of Magic’s Dolores Umbridge as Defence Against the Dark Arts teacher (and eventually headmistress), that Hogwarts goes from being a private school to being a public (government-run) school? The walls are soon filled with newly issued 'Educational Decrees,' and Umbridge goes on a spree of banning and prohibiting and forbidding with the zeal that only a bureaucrat can know.
These books are known, among other things, for their satire: Rowling is particularly ruthless in her portrayal of unscrupulous and inept politicians and media-hounds. We know, from other interviews with Rowling, that magical children are homeschooled until they reach the age of eleven, upon which many go to schools like Hogwarts, or Durmstrang, though some continue on as homeschoolers. There certainly seems to be an underlying satire against government-sponsored education in these books, and especially in Order of the Phonenix. In one part of the movie (can’t remember if this line is in the book or not), Hermione says, ‘The Ministry [of Magic, i.e., the Government] is interfering at Hogwarts.’ This is obviously considered a bad thing, in these stories. I wonder how many readers/viewers will get the point and pull their kids out of government schools?
Written by W. C. Newsom at 12:33 PM

I finally saw the movie yesterday. I think it's the best yet.

As you know, I haven't read any of the books. But just from the movie, it seems like Rowling is attacking something broader than government-sponsored education. She is criticizing any form of totalitarian rule. I almost think that Rowling's Protestantism came out in this one along these lines. Umbridge is criticized for her "medieval" disciplinary measures, and is named Inquisitor of Hogwarts. You have the taking away of individual choice and the exercise of conscience, with the multiplication of rules as a system of control. Though I think what you're saying is true too, it sounded as much to me as a criticism of the late Medieval Roman Church, or maybe the English Church under the Stuarts. Of course, with observation cameras all over the streets of major cities in England, as has been in the news as of late, it could be that Rowling is criticizing modern day England, as she watches Orwell's fears come to life.