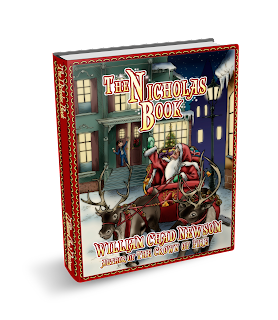 I'm also posting here information on my books, in order to have a landing page for them, and for those who want more information on them. Here's one for a book I wrote for my kids, The Nicholas Book: A Legend of Santa Claus.


Pastor Douglas Wilson tells of a family who told their little girl that Santa Claus was not real, and received this reply: "Is Jesus real?" In a world filled with doubters and skeptics, who needs one more thing to confuse our children?

On the other hand, I, like many, grew up with the Santa Claus legend and very much enjoyed it. But because of stories like Pastor Wilson's, I was concerned to think carefully about what I taught my children concerning Saint Nicholas. For several years, I remained relatively silent on the issue, not saying much of anything about the Santa Claus legends one way or another. Eventually, of course, I had to take the time to settle the matter. To work through my own views on the various Christmas legends surrounding St. Nicholas, and to discover just what I needed to teach my children, I wrote The Nicholas Book: A Legend of Santa Claus.

If it comes down to a choice between losing Santa or losing Jesus, then Santa will have to go. But if it was possible to keep the Santa story, then I needed a story my children could grow into—not a story they would be forced to grow out of. As it stands now, children have to grow out of the Santa story, which is a sure sign that something is wrong. But it doesn't have to be that way. The great G. K. Chesterton said it well:

"What has happened to me has been the very reverse of what appears to be the experience of most of my friends. Instead of dwindling to a point, Santa Claus has grown larger and larger in my life until he fills almost the whole of it."

The best things of childhood are not lost when we become grownups: if they are truly worthwhile, we can keep them, albeit in a different form. But if the Father Christmas story was to be something my children could grow into, then that meant giving the story back to Legend and Mystery.

What am I trying to achieve with this book? It can be expressed in two ways:

First, I am trying to retain for my children the wonder, excitement, and joy of the Saint Nicholas legend, but in a better version of the story, and without lying to my children.

Second, I am trying to turn my children’s eyes back to Bethlehem, and away from the North Pole, but without killing the magic. For the death of magic is always accompanied by the birth of unbelief.

Here's the official description of The Nicholas Book:

"Journey back to small town America in 1959, as the story follows the adventures of Joshua and Rachel Kirk, two kids who set off on a quest to learn the truth about Santa Claus. Hearing of a mysterious book that may answer their questions, they head for The Old Page Bookshop; but on the way, they are pursued by enemies, one who wants revenge, and one who wants only the Book. To find the truth, Joshua and Rachel will have to face their fears, and learn to see the magic of the world with new eyes."

How can your family use and profit from this book? First, I would encourage you to read it with your children, every Christmas. It's a fairly short book, and if you read three chapters a night, you can finish it in less than a week. If you have a limited amount of time to read at night, just read a chapter or two, and spread it out over the two or three weeks of December leading up to Christmas. You can even read it after Christmas Day: after all, the traditional Twelve Days of Christmas begin on Christmas Day.

Second, the book was written to grow with your children, so that they will get something different out of it when they're ten or twelve than when they're six or eight. The Nicholas Book was written to replace the secular myth, but it also includes allusions to some of the modern-day stories, like the North Pole, and reindeer, so that you can keep those, if you choose, in your own family lore. Children will hear a new, and, I hope, engaging, version of how the secular myth fits in with the traditional legends, as they journey through The Nicholas Book.

As noted above, the two heroes of our story, Joshua and Rachel Kirk, discover an old book that tells (retells, actually) the story of Saint Nicholas. That story is important, and it will help you in teaching your children a Christian view of Santa Claus: the old book that they read symbolizes the Santa Claus story itself. Saint Nicholas belongs both to history and legend: the legendary elements we treat differently, as something surrounded by mystery, something that may or may not be true. In this legendary sense, children can choose to believe it or not; but either way, they must not miss the truth of Bethlehem, and the undoubted magic that is going on around them.

To purchase your own Kindle version of The Nicholas Book: A Legend of Santa Claus, click here. And remember, even if you don't own a Kindle, you can read Amazon Kindle books on your computer or phone. Click here to get your free Kindle app.
Written by William Chad Newsom at 7:46 PM